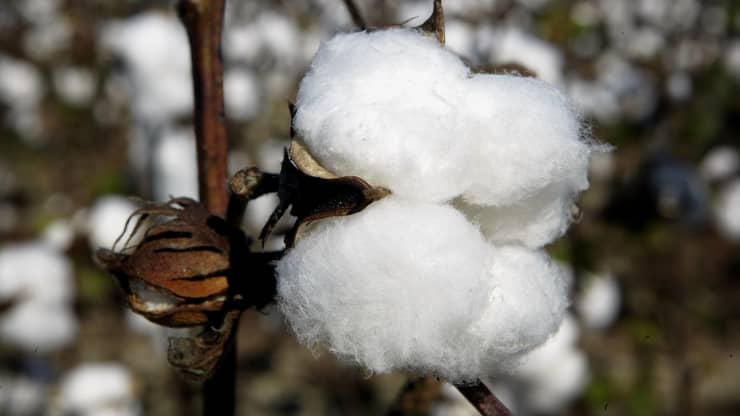 Cotton prices just hit a 10-year high. Here‚Äôs what that means for retailers and consumers

The last time cotton prices were this high, was in July 2011.

Bergh recalled how he had just joined the denim retailer and was learning his way around Levi’s business. But he was also staring down a historic surge in cotton prices. Cotton had skyrocketed above $2 a pound, as demand for textiles rebounded from a global financial crisis, while India — a major cotton exporter — was restricting shipments to help its domestic partners.

The price of a cotton T-shirt rose about $1.50 to $2, on average, National Retail Federation Chief Economist Jack Kleinhenz said. Consumers felt the impact. And it also ate into companies’ profits.

Bergh sits in the camp with analysts and experts who say the current cotton price inflation will be less damaging to the industry. Manufacturers and retailers have pricing power. Companies will be able to pass along the higher costs without destroying consumer demand.

“It’s a very different situation today,” Bergh explained. “We’ve been able to take pricing over the last 12 months and it’s sticking. ... We priced ahead of some of these inflationary pressures hitting us.”

Cotton prices surged to a 10-year high on Friday, reaching $1.16 per pound and touching levels not seen since July 7, 2011. The price of the commodity rose roughly 6% this week and is up 47% year to date. Analysts note that gains are being intensified further from traders rushing to cover their short positions.

The runup stems from several factors. Last December, the Trump administration blocked companies in the United States from importing cotton and other cotton products that originated in China’s Western Xinjiang region over concerns it was being produced using forced labor by the Uyghur ethnic group. The ruling, which has remained in place during the Biden administration, has now forced Chinese companies to buy cotton from the U.S., manufacture goods with that cotton in China, and then sell it back to the U.S.

Extreme weather, including droughts and heatwaves, have also wiped out cotton crops across the U.S., which is the biggest exporter of the commodity in the world. In India, deficient monsoon rains threaten to hurt the country’s cotton output.

The dynamic has already pressured shares of Hanes Brands, an apparel manufacturer known for its undergarments and cotton T-shirts. Historically, Hanes Brands shares fall as cotton prices rise. The stock tumbled 7% over the past week. On Friday alone, shares shed 5% to close at $16.23.

Credit Suisse analyst Michael Binetti said he views any worries or pullbacks on retail stocks because of the rising cotton prices as overblown.

He said only 2% of Hanes Brands’ cost of goods sold comes from direct cotton purchases. Back in 2012, that figure was higher, at 6%.

Following the runup of cotton prices in 2011, Hanes Brands hiked the prices of various cotton goods by a double-digit percentage three times, through 2012, to offset the inflation, Binetti said. Hanes Brands’ profits still shrunk from all the costs it was facing. But ultimately, the company maintained some of those price increases. Today, it is in a healthier position with stronger profit margins, the Credit Suisse analyst said.

“We think the stocks are under-appreciating the most powerful dynamic that this sector has not had in over a decade. Real pricing power,” Binetti said.

Retailers have achieved that pricing power by proactively veering away from discount channels and culling excess inventory. The Covid pandemic has acted as a “cover” for companies to accelerate this shift. Ongoing supply chain bottlenecks have also played a role in tightening up inventories. This dynamic has driven costs up so much, businesses are raising prices and consumers are still buying.

“We think inventory will remain rational, margins will remain strong, and retailers will be able to push bigger and more consistent price increases than they’ve been able to for over a decade,” Binetti said. He expects the cotton inflation will be transitory.

UBS analyst Robert Samuels said the retailers he expects to be hardest hit by the rising commodity prices are those that specialize in denim. Cotton accounts for more than 90% of the raw materials used to make jeans and other denim goods.

“As if retailers don’t have enough things to worry about with supply chain constraints and labor shortages,” Samuels said in a note to clients.

But Levi has already attempted to assuage any fears about its denim business.

In its earnings call, Levi said it has already negotiated most of its product costs through the first half of next year, at very low-single-digit inflation. For the second half of the year, it expects to see a mid-single-digit increase. And Levi said it plans to offset that hike with the pricing actions it’s already been taking.

Levi has been shifting its business from predominantly wholesale to a mixed base that has a growing share of direct-to-consumer sales. And with strong consumer demand and tightened inventories, it’s been able to sell more products at full price.

Cotton accounts for about 20% of the cost to make a pair of Levi’s jeans, Chief Financial Officer Harmit Singh said, with every pair of jeans containing about two pounds of cotton.

Due to the timing of its earnings call, Levi was one of the first apparel retailers to comment publicly on the surging cotton prices. Others will report fiscal third-quarter results in the coming weeks.

According to analysts at Goldman Sachs, it will take a while before the rising cotton costs even begin to show up on retailers’ income statements, given the timing of contracted cotton purchases. And it’s worth noting that in 2011, cotton prices spiked to more than $2 per pound, which is well above where the commodity is trading today.

Still, apparel stocks may face some pressure as the higher prices persist. As examples, analysts flagged companies such as Ralph Lauren, Gap Inc., Kontoor Brands, and Calvin Klein-owner PVH. Shares of Kontoor Brands, which owns Wrangler and Lee jeans, fell nearly 6% this past week, while PVH, Gap and Ralph Lauren each ended the week down less than 2%.