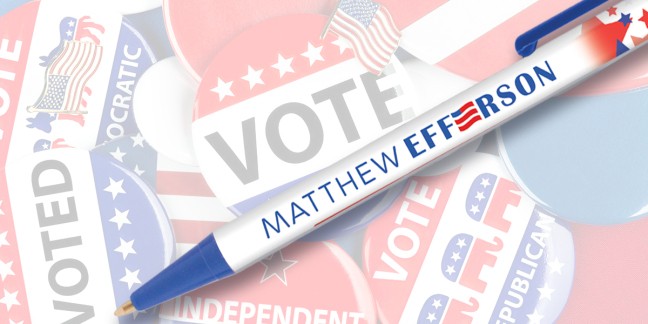 Why Campaign Consultants Use Promo Pens in Every Election

Candidates vying to secure a seat have one thing in common: they’re campaigning to win. And effective campaigning takes market research, strategy, and execution to appeal to the masses. That’s why candidates often turn to consultants to better understand and tap into their audience’s behaviors and motivators. Enter 360 Degrees to Win, a political consulting firm tasked with helping contenders position themselves to win.

What’s A Must-Have Advertising Medium for Every Campaign?

If you guessed TV ads, they certainly do help, but they’re incredibly expensive and aren’t readily feasible for all types of elections and campaigns. No matter the arena, from school boards to city councils and beyond, there is one advertising medium that the team at 360 Degrees to Win uses for every type of campaign. Pens.

Regardless of voter demographics or party lines, everyone uses pens, making them a universal advertising and marketing tool.

Affordable, practical, and used on a daily bases, promotional pens can place a candidate’s name and message in the hands of the voters.

Pens with a Purpose

Here are the top reasons the team at 360 used pens for every client:

Promo Fact: According to consumer research conducted by the Advertising Specialty Institute (ASI), promotional products are the most highly regarded form of advertising—even surpassing televised ads.*

*Case study based on an actual marketing event. 360 Degrees to Win is a fictitious name.